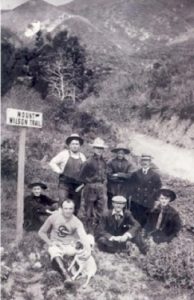 The Mt. Wilson Trail Race is one of the oldest races in California. The first Mt. Wilson Trail Race was held in 1908. Runners raced to Mount Wilson, rested for a half hour, and then raced back down. Joseph B. King of San Francisco was the winner of the first race. His time for the round trip was 2:11:35. The idea of the race originated with Charles J. Fox, published of the Police Gazette, offered a beautiful gold medal to the athlete who could win the race three times. the race was held sporadically from the first year until the late 1940‘s and early 1950‘s when it was abandoned completely. In the fall of 1965 the race was revived and is now an annual Sierra Madre event. The current race course is 8.6 miles in length starting at Kersting Court to Orchard Camp and back. The elevation gain is over 2,160 feet. the course has been changed by fires, earthquakes, and erosion and for this reason no official record is recognized. Emergency support is stationed at strategic points along the course to give any necessary aid. Boy and Cub Scouts Troops provide water at the 2.3 mile marker and at the turnaround point. The race is now put on by a volunteer committee and is sponsored by local businesses and organizations.

The first trail to Mt. Wilson was made by the Gabrielino Indians and was used by them when they carried timber from the mountains for use in the construction of the San Gabriel Mission in 1771. The original “Mt. Wilson Trail” was built in 1864 by Benjamin I. Wilson, known as “Don Benito.” In 1889, Harvard College established the first observatory on Mt. Wilson. The Pacific Electric “Red Cars” established their route to Sierra Madre in 1906 until 1950. Literally thousands of people rode the cars to Sierra Madre to hike the Mt. Wilson Trail. 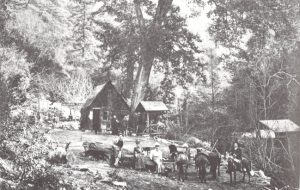